As a Pitching Coach / Instructor my MISSION is to educate and train athletes as well as their parents and coaches. I strive to create a positive environment in which every athlete can reach their greatest potential.

My objectives are to educate athletes on:

I’m dedicated to finding the latest cutting edge research on pitching. I work on a regular basis with world renown pitching coach, Tom House.  Tom has studied numerous pitchers over the years, at all skill levels, using the latest in modern technology, and has identified 8 phases as key points of a pitching motion.

When looking for a pitching instructor & coach, experience on the field and being in the game is truly what I would look for when searching for a professional to learn from.

I want to share with you my history / baseball experience and how it all came to be:

Baseball has always been in my blood and helping others to reach their greatest potential is my goal.

If you’re ready to get the ball rolling,  just visit our contact page to get pitching lessons started.

Don't stride across your body

Step straight to the plate

Get on Top to create angle

Get on top of the ball 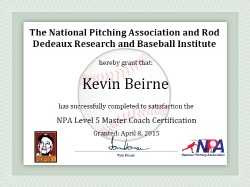